Although I didn't watch the GOP debate the other night, I heard it was quite a contentious affair.  But a quick review of the transcript reveals one issue on which several of the candidates seemingly agreed (again): the American manufacturing sector is in dire straits.  Here's a sample:


SANTORUM: ... When I grew up in Butler, Pennsylvania, a little steel town, 21 percent of the people of this country worked in manufacturing. It is now nine. If you want to know where the middle of America went, it went to China, it went to Malaysia, it went to Indonesia. We need to bring it back.

HUNTSMAN: ... If we want to strengthen our core in this country, which we must do, the percentage of our GDP that is from manufacturing is down to 10 percent or 11 percent. When I was born, it was 25 percent. It used to mean something when you read “Made in America.” We don’t make things anymore in this country. We need to start making things in this country.

Unfortunately, and as I've said here many times, this is flat wrong: the US manufacturing sector is producing more value today than it ever has (even in this nasty recession), but it's just doing so with fewer workers and as a lower percentage of total GDP. 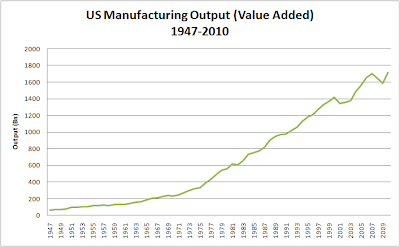 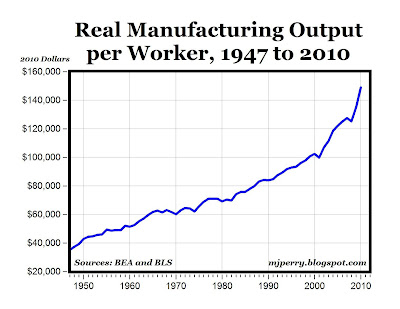 Our amazing industrial productivity, of course, is not isolated to the United States.  In fact, it's happening pretty much everywhere on the planet (including China): 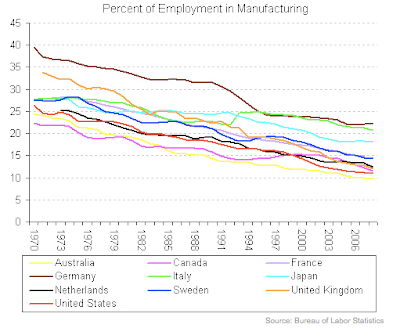 This, along with the growth of the US services sector, accounts for the historical decline of manufacturing's share of US GDP - something also happening everywhere else in the world: 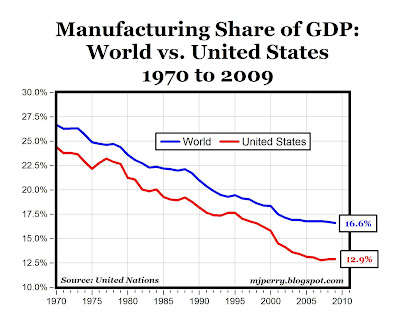 As I noted a while back (quoting AEI's Mark Perry), a very similar thing happened to the US agriculture sector last century (and yet no one laments the "decline of American farming"). 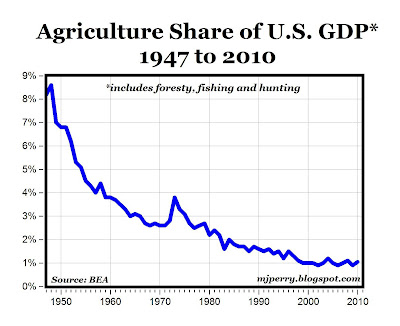 I guess the bright side from the Iowa debate is that no one on the stage blamed manufacturing's "decline" on free trade or China or Mexico, and instead focused on many of the real problems that American manufacturers (and other businesses) currently face, such as our government's onerous tax and regulatory policies.  But, still, sloppy statements and anecdotes such as those from Huntsman and Santorum reflect a basic misunderstanding of the American economy, and, as we all know, are ripe for protectionist demagoguery.

And, frankly, they should know better.
Posted by Scott Lincicome at 9:48 AM

There's a very simple reason why I ignore the trade deficit here - because it's a meaningless statistic. Educate yourself here, and then let's talk:

What is the source of the data for these graphs? Is it from the Bureau of Economic Analysis link given in the second paragraph?

The other charts have the sources listed. Most of them, as you also can see in the charts, were borrowed from Mark Perry's great blog: http://mjperry.blogspot.com/.

(I made the first chart myself using that BEA data, but I was lazy and didn't put the source in the chart itself.)