In the coming days, Congress is expected to consider and pass legislation responding to the ruling of the Court of Appeals for the Federal Circuit in GPX Int'l Tire Corp. v. United States and amending the US countervailing duty law to expressly apply to imports from "non-market economies" like China and Vietnam.  I'm thus going to spend some time this week analyzing at the issue in greater detail.  First up is a look at whether the Obama administration's claims that, without congressional action, subsidized Chinese (and to a lesser extent Vietnamese) imports will flood into the United States and drown myriad US companies and workers.  So is that really correct?

In short, no.  And the reasons might surprise you.

As you may recall, last month USTR Kirk and Commerce Secretary Bryson sent an urgent letter asking them to quickly pass legislation correcting the CAFC's ruling.  Their reasoning was straightforward enough:


This matter is ofthe utmost urgency. Absent legislation, should the decision of the court become final, Commerce will be required to revoke all CVD orders and terminate all CVD proceedings involving non-market economy countries, including 24 existing CVD orders on imports from China and Vietnam, as well as five pending investigations and two recently filed petitions.  This would seriously undennine the ability of the United States to remedy the harmful effects of unfairly subsidized imports, and would impair Commerce's ability to ensure that our nation's manufacturers and workers have the opportunity to compete on a level playing field with our trading partners.

The CVD proceedings placed at risk by the court's decision cover a wide range of products in which U.S. manufacturing is most competitive, including steel, aluminum, paper, chemicals, tires, and other products. The annual value of the subsidized imports covered by these CVD proceedings is $4.7 billion. The U.S. petitioning industries that are competing against these subsidized imports include small and medium-sized enterprises and large corporations; family-owned businesses and Fortlme 500 companies. These petitioning industries - representing more than 80 companies - are spread across 38 states and employ directly tens of thousands of manufacturing workers....

[P]rompt legislative action is necessary to clarify the law and avoid harm from injurious, subsidized goods. We stand ready to work with the Congress to enact specific legislation that would remedy the court's flawed ruling.

In short, if Congress doesn't pass legislation amending the CVD law to expressly apply to NME imports, two horrible things will happen: (1) Commerce won't be able to address unfairly subsidized imports from China and Vietname; and (2) the revocation of those 24 CVD orders and 7 pending investigations will obliterate 80 US companies and "tens of thousands" of American workers.

Yet when we dig a little deeper, we realize that both of these claims are, well, incorrect.

First, Congress' refusal to fix the administration's big CVD/NME mess would not prevent Commerce from addressing subsidized imports from NME countries.  It would merely force the administration to (i) stop imposing countervailing duties on NME imports and thus return to DOC's previous policy of addressing Chinese and Vietnamese subsidies through anti-dumping measures; or (ii) designate China and Vietnam “market economies” and address such subsidies via the normal CVD process.

I've discussed my preference for the latter approach and will get more into that in a few days.  For now, I'll just say that designating a country a "market economy" under the US anti-dumping law is entirely at the President’s discretion, so Commerce could basically do it at any time (and then attack Chinese subsidies with CVDs).  But if the administration doesn't want to start using the normal, "market economy" methodology in AD investigations of Chinese/Vietnamese imports, it can still attack subsidies received by the foreign exporters at issue by using the NME methodology in AD cases.

To fully understand this fact, it's important to first lay out the basics.  The NME methodology is a holdover from the bygone days of command-and-control, Soviet-style economies.  Dumping is typically calculated by comparing a foreign exporter’s home market prices with the prices of the same product imported into the United States. Where the former prices are higher than the latter, anti-dumping duties are imposed on the subject imports in the amount of the difference.

However, for countries designated as NMEs, domestic prices or costs cannot be used to determine dumping because pervasive government intervention – particularly state subsidies – supposedly makes them unreliable.  Thus, Commerce calculates dumping margins by comparing US import prices with a “price” that has actually been constructed from subsidy-free input costs, expenses and profits from a comparable producer in a comparable “market economy” country like India or Thailand.  As a result, the anti-dumping duty rate on a NME import has nothing to do with an investigated exporter’s actual prices or costs and has, more importantly for our purposes, already eliminated any possible subsidies that the company received.

Indeed, this fact is exactly what creates the "double counting" problem ruled illegal by both the Court of International Trade and the WTO's Appellate Body.  Both bodies found that the simultaneous application of anti-dumping and countervailing duties on NME imports violated US law and WTO rules because the concurrent measures offset the subsidies received by investigated exporters twice (and thus lead to extra, punitive duties on their goods).  As CIT Chief Judge Restani explained in an earlier GPX ruling:


Although the court recognizes that “the exact effect of subsidies on price is difficult to measure,” it also acknowledges that “[t]here is an assumption that CVD remedies equalize the competitive playing field, by raising the price of the good when it is exported into this country.” In NME-designated countries, however, Commerce also “compares a subsidy-free constructed normal value (essentially using information from surrogate countries) with the original subsidized export price to calculate the AD margin.” Thus, any resulting NME AD margin in theory also captures the competitive advantage that subsidies may provide because the constructed NV is subsidy-free, and presumably higher than a subsidized NV, while the U.S. price presumably reflects in some way the price-lowering benefits of the subsidies. Thus, the margin is greater than it would be if subsidies were reflected on both sides of the comparison. These methodologies, therefore, when used concurrently, result in a high likelihood of double counting because they effectively counteract the same behavior twice.

So if Congress doesn't pass a legislative fix in the next few weeks and the Obama administration just can't bear to designate China and Vietnam "market economies," Commerce can still address Chinese and Vietnamese subsidies via its NME anti-dumping measures.  (This was basically what Commerce proposed - and the CIT rejected - when the court first ruled against double counting.)

You'd think that Ambassador Kirk and Secretary Bryson would know this.  But I digress.

Second, the termination of all those CVD orders and investigations would likely have little or no effect on the companies that are currently "protected" by them because every single Chinese and Vietnamese product at issue is subject to a corresponding anti-dumping order or investigation.  The homemade chart below makes this clear (showing the AD and CVD investigation number assigned by DOC to each investigated product): 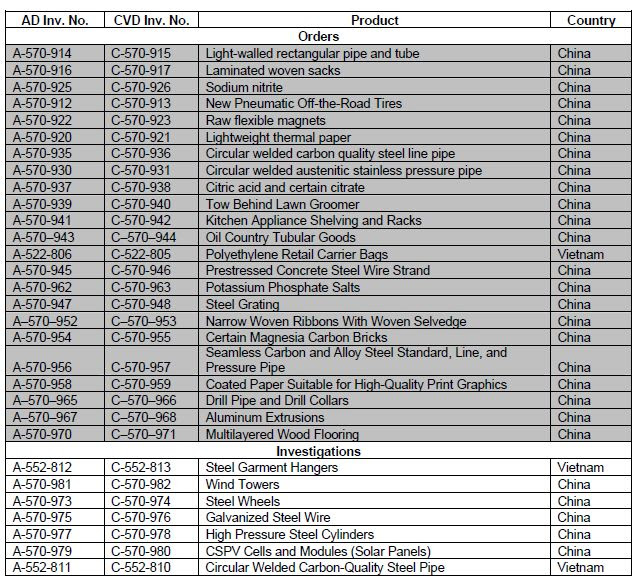 Every anti-dumping case above utilized (or will utilize) the NME methodology.  And because that methodology (as noted above) already counters subsidies received by the targeted foreign exporters, there is literally no chance that, as Kirk and Bryson claim, congressional inaction will cause "harm from injurious, subsidized goods."  In fact, a quick skim of the final AD duty rates in the completed investigations cited above shows that anti-dumping duties for a lot of the listed Chinese and Vietnamese exporters are around 50% or more - essentially shutting the subject goods out of the US market altogether.  Those prohibitive duties aren't going anywhere, no matter what Congress does (or doesn't do) to the US CVD law.

Congress probably will end up amending the US CVD law to apply to NME imports.  But let's not kid ourselves here, folks.  Failure to do so would not be the end of the world for Commerce or "tens of thousands of manufacturing workers."

Far from it.
Posted by Scott Lincicome at 7:24 PM