The Idiocy And Immorality of American Tariffs

From the United States International Trade Commission (ITC) comes further proof that US tariff policy is, as the the kids say, freakin' whack.

(Ed. note: the kids haven't said that in a decade, if ever.)

In a new report (PDF) released last week, the ITC estimated "changes in U.S. welfare, output, employment, and trade that would result from the unilateral elimination of significant import restraints, specifically U.S. tariffs and tariff-rate quotas on certain agricultural products, textiles and apparel, and other manufactured products."  In non-nerdspeak: the ITC examined what would happen to the US economy if the government just woke up one day and decided to remove all major barriers to trade in goods.  Their results are probably surprising to many people, particularly those lost souls who listen to their elected officials' demands for reciprocal, tit-for-tat, tariff reductions in global trade negotiations.  Most broadly, the ITC projected that:


U.S. economic welfare, as defined by total public and private consumption, would increase by about $4.6 billion annually by 2013 if all significant restraints quantified in this report were unilaterally removed. Exports would expand by $5.5 billion and imports by $13.1 billion....

For most liberalized sectors, prices faced by households and domestic producers would both fall.

Put simply, by just removing trade barriers, the US Government could improve the lives of American families and businesses by $4.6 billion per year over the next four years.  This "free stimulus" also could expand US exports by $5.5 billion over the same period.  Crazy, huh?

Granted, $4.6 billion isn't a lot of money in the grand scheme of things, but it's still nothing to sneeze at. And unlike all the other economic "stimulus" nincompoopery out there, these benefits would cost the US government, and thus us taxpayers, nothing!  Yet these self-defeating trade barriers remain in place and our trade negotiators and politicians demand reciprocal "concessions" from other countries before even considering eliminating them.  Indeed, compared to the last version of the ITC report, most of these restrictions are exactly the same as they were two years ago when the economy was still humming along.  How does this make sense? (Hint: It doesn't.)

Now, critics of free trade and defenders of the "reciprocity model" of trade negotiations could argue that the ITC's projections are unsound, and they may well have a point.  Projecting the impact of tariff reductions or increases is nearly impossible because the changes themselves will directly and indirectly affect all sorts of economic behavior.  Fortunately, the most common critics of free trade have been singing the ITC's praises for months now, ever since it recommended the imposition of 55% tariffs on Chinese tire imports under Section 421 of US Trade Law.  For example, Congressman Sander Levin (D-MI) recently lauded the economic analysis of the "independent, bipartisan" ITC in the tires case, and United Steelworkers President Leo Gerard had similarly complimentary things to say.  So I'm sure that now the same ITC analysis demonstrates the overall economic benefits of unilateral tariff elimination, these guys will continue their praise and support of the Commission's findings, right?

Anyway, even if the ITC's modeling is off, their new report remains highly valuable because it spotlights where the biggest US barriers to trade remain and the effects of those barriers on everyday Americans. And it's these incontrovertible findings that should have most Americans pretty ticked off.

The table below is from the 2009 ITC report (click to enlarge).  It shows the products that face the highest import and export tariffs in the United States, as well as the US-world price difference caused by those import barriers. 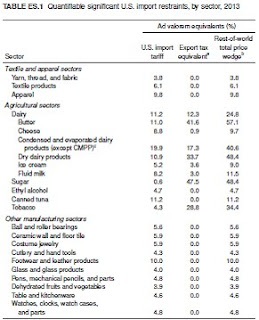 As you can see, some of the highest trade barriers in the United States are on things that American families use everyday - food (cheese, butter, milk, sugar, tuna, etc.), clothing (including thread, fabric and textiles) and shoes.  The taxes on these necessities range from a few percent to almost 48 percent, and these trade barriers result in US prices that are up to 57 percent higher than prices for the same goods in other markets.  So, for example, US trade policies force American families to pay $1.57 for a stick of butter, while Canadian families pay only a dollar for the exact same thing.  Nothing like a 57% butter tax to help the Joneses really tough-out the recession, huh?  Awful.

Unfortunately, because these goods are necessities, it's not like Americans can protest the policies by boycotting the protected products.  We all need shoes, clothing and food, and these are across-the-board price increases.  Worst of all, this "necessities tax" is highly regressive, as it forces the poorest Americans to fork over the largest share of their paychecks in order to buy the protected/taxed products.

And the US government is taxing American families and businesses for what?  To help the American butter/sugar/textile/whatever industry?  Actually, yes, that's exactly what our tariff policies are doing and have done for decades - regressively taxing American consumers and businesses in order to line the pockets of well-connected special interest groups like the US sugar lobby.  Seen this way, American tariff "peaks" are just like earmarks: legislative creations championed by in-the-bag politicians that force you and me to pay higher prices for the stuff we need in order to subsidize the pols' cronies.  (And disproportionately harming the neediest of Americans in the process!)

Considering the current economic malaise, I'd say it's about time that such an idiotic, immoral system is overhauled, wouldn't you?  (And maybe we could ditch our outdated reciprocity model of trade negotiations while we're at it.)

Now who's with me?
Posted by Scott Lincicome at 3:24 PM

You write "Put simply, by just removing trade barriers, the US Government could improve the lives of American families and businesses by $4.6 billion over the next four years."

But the report you quote says that "U.S. economic welfare, as defined by total public and private consumption, would increase by about $4.6 billion annually by 2013 if all significant restraints quantified in this report were unilaterally removed."

As I read this, it means that US welfare would actually improve by $18+ billion over a four year time period, not the $4.6 billion you cite. Am I wrong?

You're right, Colin. It was poor writing that I've since corrected. Thanks.