Steve Jobs took the stage Wednesday to sell the world on one of his biggest gambles since returning to Apple Inc. nearly 15 years ago: a multimedia tablet-style computer called the iPad.

The 9.7-inch touch-screen iPad, which will let users play games, check email, and read books, presents a major challenge to the media, publishing and wireless industries. For Mr. Jobs, it is an attempt to convince consumers they need yet another gadget—one between their mobile phones and laptop computers.


The iPad is basically an iPhone with a bigger, badder HD screen and e-reader capability, but other than its (admittedly high) "cool factor," the gadget wasn't received as that revolutionary.


Yes, Apple's iPad is revolutionary–but mainly because it's cheap.

By offering the tablet computer for as low as $499, Apple has found a way to meet demand for low-priced laptops without a radical price cut on its Mac line. Yet its cheaper computer not only has all the utilitarian functions of a laptop, such as word processing and email, but enhanced entertainment capabilities as well. And it can run iPhone mobile applications.


The highest priced iPad will be only about $800, and that's pretty amazing.  How amazing, you ask?  Well, according to one tech investment website, the iPad's price announcement caused Apple's stock to stage a serious midday turnaround:


Strangely, during the course of the much-anticipated event, Apple’s stock went down, as observed by many. And then, Apple finally got around to talking about pricing.

Chief executive Steve Jobs took the stage, and wowed the crowd (and the world) by saying that the starting price for the iPad was a stunning $499.

Guess what happened next?

We wouldn’t be surprised to see it hit an all-time high today.


Jobs' price announcement happened around 2:20p EST, and look what happened immediately after that: 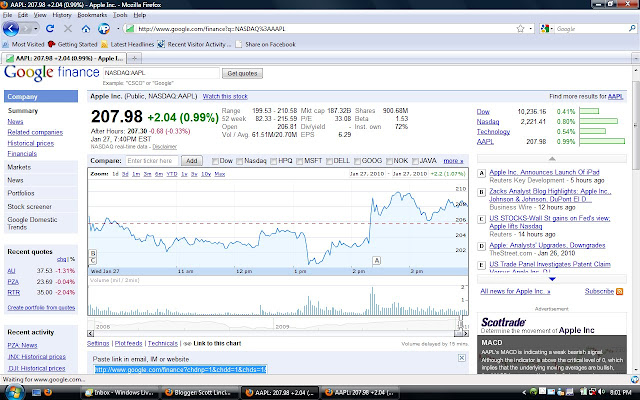 Pretty cool, huh?  Now, how do you think that Apple got the iPad's base price to be about half of its cheapest Mac laptop?  Well, assuming the iPad's anything like its little cousin the iPod, the answer is simple: free trade.  As Dan Ikenson and I discussed in our 2009 study (PDF):


A 2007 study published by the University of California–Irvine sought to determine “who captures value in a global innovation system” by disaggregating the components contained in an Apple iPod and determining the companies and countries involved in manufacturing a unit in China. The authors found that the components were produced in the United States, Japan, Singapore, Taiwan, Korea, and China by companies headquartered in the United States, Japan, Taiwan, and Korea. The total cost of producing the iPod (components plus labor) was estimated to be about $144. Most of the profits on the constituent components accrue to Japanese companies, who produce the most important and most expensive parts. Two U.S. and some other foreign components’ producers all capture small shares of the value. But the lion’s share of value accrues to Apple since iPods retail for $299 and the cost of production is $144 (at the time this article was written)....

Without access to assembly operations in lower-cost countries, the mass production and proliferation of iPods and similar devices likely would not have been possible. Instead of $299, iPods would cost perhaps $500 or more if they had to be produced entirely in the United States. At that price point, it is unlikely that sales of iPods would ever have been as successful as they have been, and the need for all of those American jobs in engineering, logistics, transportation, advertising, web design, and retailing might never have materialized.


(This awesome video by ReasonTV makes a similar - yet bikini-clad - argument.)

Now, a full "teardown" of the iPad isn't available yet (of course) and won't be for a while, but based on the limited information that I could find, it appears that Apple's iPad emerged from much the same global sourcing and development strategy as the ubiquitous iPod.  Taiwanese manufacturers produced the iPad's batteries, display panels and other guts (note: not a technical term).  A US semiconductor design firm, PA Semi (purchased by Apple in 2008) designed the iPad's revolutionary A4 processor, and had it manufactured (or "fabbed," as the techies say) in either Korea or Texas (nobody's quite sure of that yet).  Korean manufacturers are also rumored to have produced a few other component parts, and all of them were assembled in China.

So again we see the same Apple recipe: (i) research, development, design, marketing and some manufacturing in the United States; (ii) component production in Taiwan and other foreign countries; (iii) and final assembly in China.

The result?  A hyper-competitively priced product that's destined to excite consumers and further enrich Apple, its American employees, and, as today's stock boost makes quite clear, its many happy shareholders.
Posted by Scott Lincicome at 9:36 PM