Bi-Partisan Opposition to US Cotton Subsidies

Easily the biggest roadblock to reforming America's bloated, irrational and (often) WTO-inconsistent farm subsidies is the overwhelming bi-partisan support for them.  Whether in Congress or the White House, Republican or Democrat, it doesn't matter - agribusiness gets some L-O-V-E from almost everyone in Washington.  For a simple example of this fact, one need only look to the awful legislation introduced this week by Sens. Chuck Grassley (R-IA) and Kent Conrad (D-ND) that would obtusely extend a bevvy of ridiculous ethanol subsidies and the 54-cent-per-gallon tariff on imported sugar ethanol.  Of course, these Senators aren't alone in their blind love for using Americans' tax dollars to line the pockets of US agribusiness; indeed, you can't fall down on the House or Senate floor without hitting at least two Congressmen/Senators who issue a near-Pavlovian "Aye" vote every time they hear the words "farm" and "support" used in the same sentence.

However, there have always been a few poor, ostracized souls in Congress who refuse to grab a ladle for the farm subsidy gravy train, but they're pretty darn rare, and they end up taking a lot of heat on Capitol Hill and the campaign trail.  (Indeed, when they run for President, they end up getting pummeled like longtime subsidy-hater John McCain did in the all-important Iowa caucus and elsewhere in the Midwest).   So when a group of Republicans and Democrats join together to scream a chorus of "STOP THE INSANITY" on US farm subsidies, they deserve kudos and support.  Thursday was one of those times, as Congressmen Jeff Flake (R-AZ), Ron Kind (D-WI), Paul Ryan (R-WI), and Barney Frank (D-MA) sent a letter to President Obama, asking him to finally resolve the US-Brazil dispute over WTO-illegal American cotton subsidies by reforming the offending farm programs (something I've been advocating for months now) rather than what the White House is currently doing - i.e., keeping the trade-distorting programs in tact, bribingsubsidizing Brazilian cotton farmers with about $150 million in hush money"technical assistance," and putting future reform in the hands of some of the biggest cotton-lovers in Congress.

The letter from the Congressmen - affectionately referred to by Cato's Sallie James as the "Four Congressmen of the Cotton Subsidy Apocalypse"- highlights the patent absurdity of the current US action in the cotton dispute.  Just how absurd you ask?  Well, absurd enough to get super-conservative Paul Ryan and ultra-liberal Barney Frank to team up to stop the policy.  The letter is available here in a PDF, and I've also pasted it below as an image because I think it deserves as much circulation as possible.  It also deserves ample public praise, so kudos, Congressmen.  Nice job.  And who knows, maybe the ridiculous US-Brazil dispute will end up being the breaking point for a few more your House and Senate colleagues, pushing them to finally wise up and call for a dramatic reform of America's truly stupid (and dirty!) agricultural policies.

(Although I'm not holding my breath.) 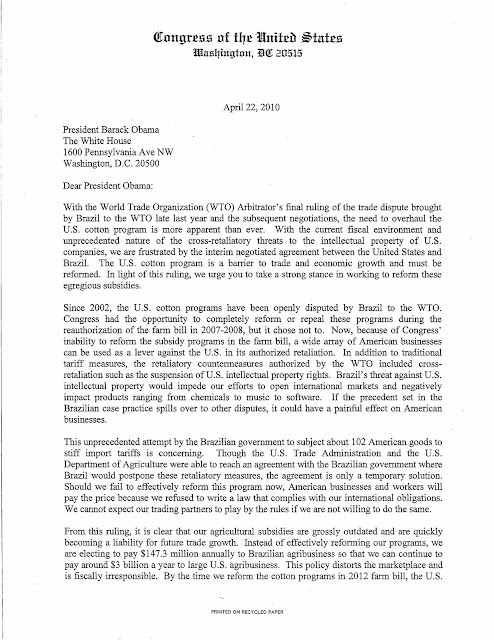 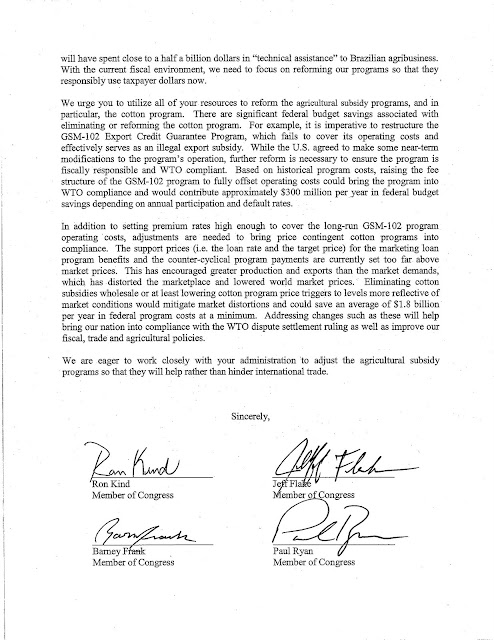 Posted by Scott Lincicome at 5:04 PM

Thanks again, Scott, for pointing out the ridiculousness of some our policies.

How effective is it for us to contact our Senators and Representatives and let them know that we oppose these subsidies? I sometimes think that we need to be much more vocal about specific issues, not just general ones. Those of us on the free market spectrum of politics need to pick out two or three smaller fights and let Congress know our opinion. Here is a specific issue that we can win a lot of support for because it is obviously flawed (giving money to Brazilian cotton farmers in order to protect American cotton farmers!?!?). Even my economic illiterate friends and family understand this one.

You are exactly right, anon. As Public Choice theory teaches us, the only ones usually paying close attention to this stuff are the subsidy recipients (or protection-seekers). More concerted efforts by regular folks to object to the insanity of our trade/subsidy policies can help overcome this problem. Indeed, raising such awareness is one of the main reasons for my blog!