Perhaps the most common refrain from the folks in Congress and the punditocracy who are demanding a drastic appreciation in China's currency (the RMB) is that the revaluation is absolutely necessary to reduce the "dangerous" US-China trade deficit.  These currency hawks' underlying reasoning is simple: China's allegedly undervalued currency makes Chinese imports to the US cheaper and American exports to China more expensive, thus creating a woefully-distorted bilateral trade balance as compared to a situation in which both the RMB and USD "floated" based on market conditions.  (See here and here for examples of this rhetoric.)

Assuming for a moment that the RMB is significantly undervalued, and that the bilateral trade deficit (or any trade deficit) is a problem for the US economy, there remains a very serious question of whether any sort of RMB appreciation, based on market factors or otherwise, will actually affect the US-China trade balance.  The currency hawks certainly think so (it's their raison d'etre), but many scholars (and your humble correspondent) disagree, pointing to the recent history of the RMB and the US trade deficit, the past experiences of Japan's currency appreciation versus the dollar, and, of course, lots of economic analysis and modeling of structural factors in both the US and China - all of which strongly argue against the theory that RMB appreciation is some sort of "silver bullet" for the bilateral trade deficit.  Indeed, a very interesting new study released today by the Centre for Economic Policy Research provides even more such evidence (and a lot of other good stuff).

Unsurprisingly, currency hawks like Paul Krugman have brushed these sound criticisms aside, arguing that they fail to capture current market realities (or something).  A story in today's Wall Street Journal, however, provides very strong support for the currency skeptics' arguments about the disconnect between nations' currency policies and their bilateral trade balances - this time from what is arguably China's largest competitor, India.  As the WSJ explains:


While rival China has been criticized for holding down the yuan's value, India has let its currency surge over the past year. The rupee has risen nearly 17% from its record low in March 2009, and analysts forecast it could gain at least 3% more to 43.00 rupees to a dollar by year end.

Conspicuous by its absence is central bank intervention. Back in 2007 when surging stock markets were driving massive capital inflows into the country, the Reserve Bank of India was quite content with occasional spurts of dollar buying to control excess volatility.

This time, the RBI has mostly stayed on the sidelines.

This news got me to thinking: given the strong similarities between India and China (e.g., population, education, per capita income and GDP, etc.), the effects of India's currency float and rapid appreciation the US-India trade balance could provide us with a crystal ball of sorts to see what might happen if China someday let the RMB float (and subsequently strengthen), as the American currency hawks demand.  And if nothing else, the effects of the rupee's dramatic appreciation versus the dollar on bilateral trade flows can provide a good little test for the currency hawks' underlying theory that, even in today's globalized economy, "smart" currency policy alone can "correct" bilateral trade imbalances.

Well, unfortunately for guys like Chuck Schumer and Paul Krugman, the results of this particular test prove once again that they deserve an "F" in Modern Trade and Currency Policy 101.

The table below sets forth the average monthly USD-INR exchange rate, US exports to India, Indian imports to the US, and the monthly US-India trade balance between March 2009 and February 2010 (the last date for which trade data are currently available).  "USD-INR" is the average exchange rate between the US dollar and the Indian rupee for the month at issue (data available here).  As you can see, that number fell significantly over the 12 months selected - in March 2009, $1 bought you almost 52 rupees, and by February 2010, it bought only 46 - thus indicating a significant appreciation of the rupee versus the US dollar.  Now, take a look at the US-India trade stats over the same period.  Notice anything interesting (click to enlarge)? 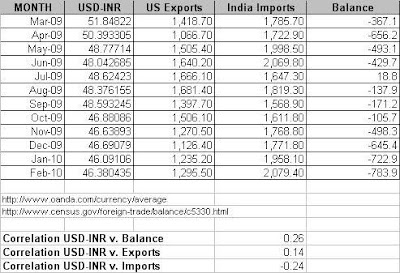 Yep, that's right.  As the rupee strengthened against the dollar, the US-India trade deficit, and Indian imports to the US, did not steadily decline, as the currency hawks unequivocally assert should happen.  And US exports to India didn't steadily increase either.  Hmm.

Thus, the US-India currency and trade data strongly undermine the idea that anyone can accurately predict how changes in currency policies will affect bilateral trade flows in an increasingly globalized economy.  There's just too much going on beyond currency for it to dictate trade.  Indeed, as the correlations listed above show, there's actually a weak, positive correlation between a stronger rupee and both increased Indian imports and an increased bilateral trade deficit, and there's a weak negative correlation between a stronger rupee and increased US exports.  The graphs below make this counter-intuitive relationship clear (click to enlarge): 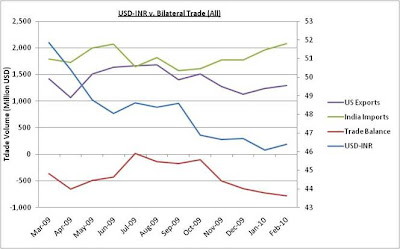 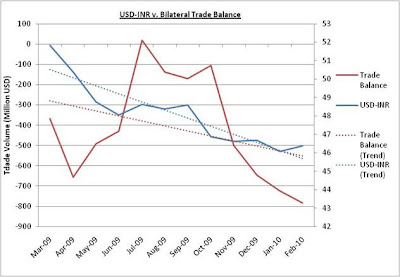 Gee, that's not supposed to happen at all - the rupee appreciated, and the trade deficit grew.  Well, what about US exports to India?  Surely they benefited from the relative decline in the dollar's strength, right?  Right? 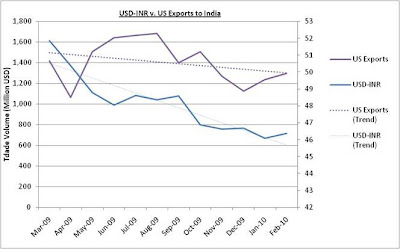 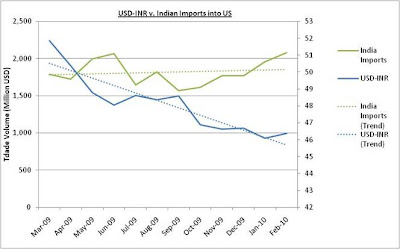 Doh!  That's three big strikes for the currency hawks.  If they were correct that steady appreciation of a nation's currency versus the dollar would dramatically reduce its trade surplus with the United States, the bilateral trade balance and imports/exports trendlines above would actually be moving in the exact opposite direction!  And the month-to-month export and import data would be far less erratic.

Now, I don't mean for a second to suggest that these data prove that the RMB's eventual appreciation against the US dollar will definitely lead to a larger US-China trade deficit (although that did happen a few years ago).  Instead, my point is far simpler and, I think, far more important: the Indian rupee's recent experiences are further proof that, in today's globalized economy, the facts simply do not support the claims from currency hawks that a floating currency will narrow bilateral trade imbalances, or that RMB appreciation will definitely increase US exports to China and decrease both Chinese imports to the US and the US-China trade deficit.  Is a market-based RMB a good idea for China and the global economy?  Sure, but to claim that it will "fix" the US-China trade deficit or the US economy more broadly, is utterly without merit.

And the broader lesson remains, as usual: when politicians and economists state without equivocation that they know the precise impacts that China's currency appreciation will have on US-China trade flows and/or the US economy more generally, just stop listening to them.  Because they haven't a clue.

Final note: Be sure to check out that CEPR study mentioned above.  The main conclusions will not be surprising for readers of this blog, but they most certainly will be for those believers in the currency hawks' conventional wisdom.  The study's conclusions, in short: RMB appreciation will improve China's global competitiveness and actually end up destroying American jobs.  Oh goody.
Posted by Scott Lincicome at 9:04 PM