This doesn't really change anything in my earlier post on Mr. Trump, his anti-China rhetoric or some conservatives' embrace thereof.  But still, dude:


Donald Trump has emerged in recent years as the nation's foremost China basher, going after the Asian superpower for undervaluing its currency and for taking American manufacturing and jobs. So it's at least ironic -- and at most an example of gross hypocrisy -- that Trump's own line of men's wear, the Donald J. Trump Signature Collection, is manufactured in China.

I discovered this after walking from Salon's offices to the large Macy's in midtown Manhattan, where an entire section is devoted to the Donald J. Trump Signature Collection of suits and ties. This particular corner of the store is decorated with an oversize portrait of Trump; the line promises to provide "the pinnacle of style and sophistication" and "the necessities to be boardroom ready all of the time."

Here is the tag on one of the Trump shirts: 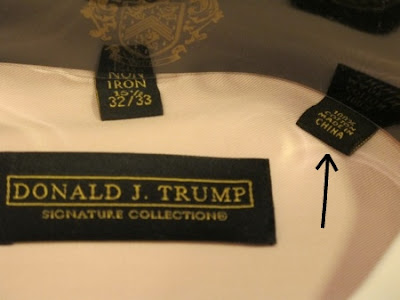 The phone number listed on Trump's website for the Signature Collection goes to the "licensing coordinator" at the Trump Organization, Amy Steinfeldt. She did not immediately return a call. But it appears that the shirts and ties are made by the Phillips-Van Heusen Corp., which owns a license on the Trump brand....

A spokesman for Trump did not immediately respond to a request for comment.