By the time most of you read this, the House and Senate will have passed implementing legislation for the Korea, Colombia and Panama FTAs, thus ending a long and tortuous path for these trade agreements.  But before we put the FTA saga to bed for good, I've been looking at a few of the more, ahem, interesting details surrounding these deals.  Last night I went through the CBO scoring of the implementing legislation, and noted that it increased merchandise processing fees on imports from countries other than the three FTA partners to the tune of about $4.3 billion.  I forgot, however, to examine the CBO scoring of the expanded Trade Adjustment Assistance and Generalized System of Preferences legislation accompanying the FTAs.  As you'll recall, this legislation is only being considered now because President Obama refused to formally submit the FTAs to Congress unless he had assurances that expanded TAA would get reauthorized.  The CBO report (conveniently released only late last week) on TAA/GSP is available here, and the key table laying out the new TAA-related spending and revenues (i.e., taxes) is below: 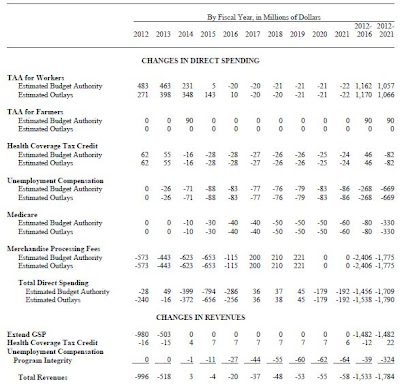 As you can see, the President's demands that TAA expansion be included with the FTAs will cost US taxpayers over $1.1 billion over the next five years.  Meanwhile, an increase in the merchandise processing fees from 0.21% to 0.3464% ad valorem on US imports will offset the cost of TAA expansion by raising over $2.4 billion in new customs fees paid by US importers (and, thus, American consumers).  The TAA bill then lowers those fees to only 0.174% in 2016, allegedly providing some $600 million in "savings" for US import consumers between 2016 and 2019.

And there's where things get a little more interesting.

As I noted last night, the CBO score for the KORUS also raises revenues (again, $4.3 billion) by increasing merchandise processing fees.  The schedule for those new fees is here: 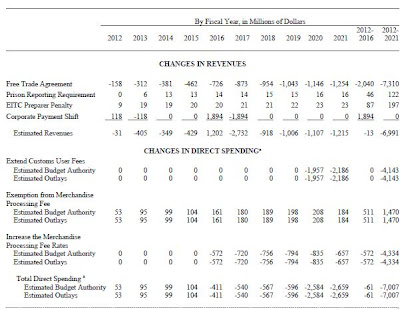 So what the heck is going on here?  I'm certainly no budget guru, but I only see two options:

(1) Assuming that the KORUS law supersedes the TAA law, then those $600 million in consumer savings don't actually exist.

(2) Assuming that the TAA law supersedes the KORUS law, then those $4.3 billion in consumer taxes don't actually exist.

I don't know about you, but I'm guessing it's the former scenario, and if so, we can add another $600 million to CBO's scoring of (and thus the price tag of) the expanded TAA bill.