I've discussed "3D printing" before, but a new must-read article from The Economist explains just how the new technology is causing a "Third Industrial Revolution."  The whole article is worth reading, but I was particularly struck by this discussion of the revolutionary technology's immense impact on national policy:


Consumers will have little difficulty adapting to the new age of better products, swiftly delivered. Governments, however, may find it harder. Their instinct is to protect industries and companies that already exist, not the upstarts that would destroy them. They shower old factories with subsidies and bully bosses who want to move production abroad. They spend billions backing the new technologies which they, in their wisdom, think will prevail. And they cling to a romantic belief that manufacturing is superior to services, let alone finance.

None of this makes sense. The lines between manufacturing and services are blurring. Rolls-Royce no longer sells jet engines; it sells the hours that each engine is actually thrusting an aeroplane through the sky. Governments have always been lousy at picking winners, and they are likely to become more so, as legions of entrepreneurs and tinkerers swap designs online, turn them into products at home and market them globally from a garage. As the revolution rages, governments should stick to the basics: better schools for a skilled workforce, clear rules and a level playing field for enterprises of all kinds. Leave the rest to the revolutionaries.

This all should scare the bejeebus out of those of us who advocate national trade and economic policies which reflect modern realities of today's markets.  Why?  Because our policymakers still haven't accepted obvious market phenomena that have been around for a decade or more, and thus develop and advocate archaic policies that actually serve to hurt domestic industries, workers and the economy more broadly.  For example, almost all US politicians - in both major parties - still kvetch about the US-China trade balance, even though study after study has demonstrated just how pointless that statistic has become in this era of global supply chains.  The latest example of that fact comes from this great new graphic (h/t ToGetRichIsGlorious) which shows the cost and profit breakdown of the iPad in 2010: 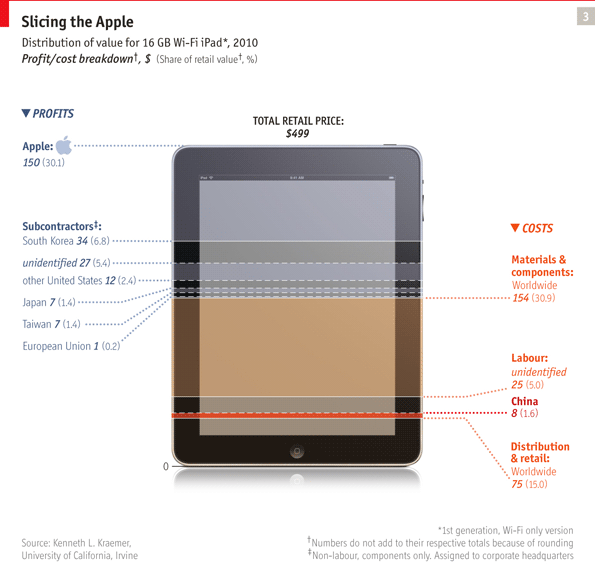 As you can see, of the of the $499 retail price, Apple (30.1%) and other US companies (2.4%) get 32.5 percent of the profits, while China gets only a tiny fraction of that (1.6%).  Yet 100% of the iPad's US customs value adds to the US-China trade deficit.  So why on earth do our politicians act like this bilateral deficit - or any bilateral trade deficit for that matter - should form the basis for US-China trade policy?  It's simply mind-boggling.

Another common example of the gaping market-politics disconnect that I've frequently lamented - and one hinted by the story above - is our politicians' continued fetishization of manufacturing (and manufacturing employment).  It warms my heart that a few politicians appear to be getting the message about services, as this recent and (mostly) refreshing op-ed from US Trade Representative Ron Kirk demonstrates:


The United States today is a services trading powerhouse, and it's vital that we build on our already robust services surplus with dynamic new opportunities...

Next month, the U.S. will host the 12th round of negotiations in the Trans-Pacific Partnership. Those critical talks will follow closely on the heels of a number of key engagements with America's global trading partners, including last week's Summit of the Americas, this week's meetings of the G-20 trade ministers, and May's Strategic and Economic Dialogue with China. In June, the trade ministers of the Asia-Pacific Economic Cooperation forum (APEC) will meet in Russia.

In all of these fora, the U.S. will be seeking new avenues for American businesses to sell more of their products around the world, and to hire more workers in the services sector, which already accounts for four out of five American jobs.

If some of those data sound familiar, they should - they mirror several of the points that I made in December about America's globally-dominant services sector (and politicians' ignorance thereof).  The aforementioned op-ed goes on to explain some of the (mostly good) things that USTR is doing to further expand US service suppliers' access to foreign markets, but unfortunately, Kirk's boss doesn't seem to share the love for the US service sector.  Instead, most of President Obama's tax and trade policies are geared toward boosting the US manufacturing sector (at the services sector's expense, naturally) - a troubling disconnect that I've noted repeatedly.  So while USTR Kirk's services affinity is certainly a welcome development, it's a bit less exciting when one considers the archaic and misguided policies pushed by the rest of his colleagues in the Obama administration.

And this gets me back to 3D printing and the "Third Industrial Revolution."  If our very "modern" and "progressive" government (and other governments like it) still refuses to recognize and adapt to simple and obvious market developments that have been going on for decades now, what hope does it have in recognizing and adapting to the more complicated and revolutionary things that are happening right now?

If the trade-related examples above are any indication, the answer to that question is as depressing as it is obvious.  That answer also should inform our faith in government policy accepting and adapting to other critical market phenomena too.  Maybe, just maybe, highly complex things like industrial policy or nationalized healthcare aren't very good ideas after all, huh?

Crazy thought, I know.
Posted by Scott Lincicome at 7:19 PM