Three Months of Section 421: Almost As Bad As Expected

It's been a while since we last checked in on the President's September 11, 2009 decision to impose high tariffs on Chinese tire imports under Section 421 of US Trade Law.  At the time of the tariffs' imposition in late September 2009, I and other free traders predicted that all sorts of bad things would result from the Section 421 decision, including:
Because the Section 421 decision just celebrated its three-month anniversary, I figured that now would be a good time to see how our predictions have panned out.  Based on the available evidence, I think it's safe to say that the decision was almost as bad as expected.

First, let's look at all of the depressing things that we got right:

(1) American tire production has not increased, and imports from other countries have risen significantly.  Several reports indicate that US tire manufacturers haven't increased domestic consumption in the wake of the Section 421 decision, while imports from other countries have increased since September because US tire importers have found other suppliers and/or Chinese suppliers have moved production to other countries.  For example, in its 3Q conference call, Cooper Tires management stated that they will not increase US production in response to the Section 421 tariff but instead will import more from Mexico.  Chinese producers also have shifted production to Taiwan and other Asian countries, and a Korean trade agency has predicted that Korean producers will benefit greatly from the US tariffs. 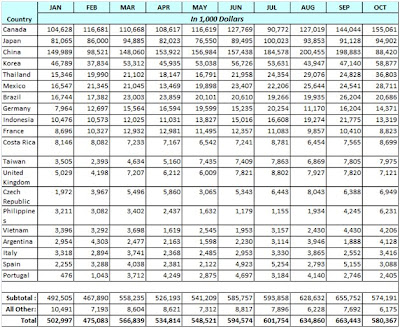 The ITC only has data through October 2009, and although it's far too early to draw any definitive conclusions from only one month of post-421 data, these numbers certainly indicate Chinese imports dropped dramatically in October, and imports from Canada, Korea, Thailand and elsewhere began to take up the slack.  Thus, trade diversion appears to be occurring, but we'll know more in the next couple months as old orders are cleared out and new suppliers are solidified.  Considering the aforementioned anecdotal evidence about US production and new import sources, it's a rather safe bet that these trends will continue in 2010.

One final thought about the ITC data: the big spike in Chinese imports right before the 421 decision definitely indicates that US retailers were stockpiling Chinese tires in anticipation of the President's decision.  The disappearance of these stockpiles could be a significant issue for prices and supply in 2010, but again we need more data to be sure.  And speaking of prices...

(2) US tire prices have skyrocketed and are projected to further increase in 2010.   Prices for low- and high-end tires have increased between 25 and 40 percent, as pretty much every major producer has announced price increases because of the Section 421 tariffs (rightly or not).  Also just as expected, poor Americans have been the hardest hit, with many opting for cheaper (and less safe) used tires or, even worse, driving on their old tires.  A typical quote: "'You figure a tire that costs 100 dollars is now 135,' says Bryan Frank, of Frank's Tires. "Multiply that by four and you're spending an extra 140 dollars.'"  That's a lot of cash for your average, cash-strapped American family.

The only "bright side" to this awful news: so far, retailers and industrial purchaser have been able to pass most of these price increases on to their consumers, instead of eating the additional costs and laying off employees.  However, the Tire Industry of America has announced that it will lobby for the repeal of the "devastating" tariffs in 2010, so clearly the industry is getting hurt by the Section 421 decision.

(3) The Chinese government has retaliated at home and at the WTO.  In early December, China requested the formation of a WTO dispute settlement panel to rule on the legality of the 421 decision.  More importantly, however, China has taken retaliatory matters into its own hands with a series of new trade remedies investigations of US exports.  As I've noted previously, China immediately responded to the 421 announcement by initiating antidumping and anti-subsidy (countervailing duty) investigations of US chicken and automobile exports.  Since then, China also has gone after American steel and chemicals.  While the trade volumes involved in these cases aren't huge (although the chicken case could affect hundreds of millions of dollars), the autos decision might end up proving really costly.  China's automobile consumption has exploded of late, forcing China to become for the first time a net importer of autos.  So if a Chinese AD/CVD order ends up in place against US automobile exports, it could force the Big Three to increase their China-based production, rather than shipping more US-made cars to China.  (I wonder how the UAW would feel about that.)

Oh, and as I noted previously, China has used the Section 421 decision as an excuse to abandon voluntary, "sectoral" negotiations to eliminate tariffs on chemicals and other products as part of the WTO's Doha Round.  Grrreat.

(4) The Section 421 was a perfect harbinger of the administration's political aversion to free trade policies.  As I've lamented repeatedly over the last few months, President Obama has established a firm policy of choosing political expediency over free trade principles, and 421 was only the tip of the iceberg this Fall.  Whether it was bilateral disputes (e.g., Mexican Trucking, Buy American, Chinese Chicken), pending Free Trade Agreements (FTAs) with Colombia, Panama and South Korea, a negotiating "strategy" for the WTO's Doha Round, carbon tariffs, or a new manufacturing policy, the Obama administration always opted for assuaging the protectionists in his own party, rather than helping the US and global economies or advancing America's foreign policy interests. Considering the long tradition of American Presidents - Republican and Democrat alike - typically championing free trade above petty politics, this development must rank up there as one of 2009's biggest disappointments.  (Yes, I know I'm extremely biased.)
Now, while free traders' predictive powers have (obviously) been really good, we did miss on one thing in the Section 421 aftermath: so far, there have been no other cases filed under Section 421.  Indeed, back in late October, USW President Leo Gerard stated that his steelworkers had no intention of filing any more Section 421 petitions in the near future.  Thus far, Gerard's statements have proven true, although the US Textile Industry hinted earlier this month that a new 421 petition might be forthcoming.  Considering that any petition takes a few months to assemble, we do need to wait a few more months before officially declaring this prediciton a dud, but it's sure looking that way so far (particularly the "flood" part).

So to recap: we predicted trade diversion, no US production increases, higher US prices, Chinese retaliation and new 421 cases.  And after three months of tariffs, we've seen trade diversion, no new US production, higher prices, and Chinese retaliation, but no new cases.  As such, I think it's safe to say that the President's decision to impose 35% tariffs on Chinese tire imports under Section 421 was almost as bad as expected.

That said, if the price increases continue and begin to affect employment among tire importers, retailers and commercial purchasers, the President's decision could actually prove much worse than originally predicted.  We'll definitely know more in the next few months, and don't worry, I'll certainly be there to report on it.
Posted by Scott Lincicome at 11:13 PM

The tires for my Honda Helix, which are made by Bridgestone and carry a "made in Japan" label, have gone up in price by about 25%. I just love paying the tariff, really I do.