It's been a while since we last checked in on the debacle that is the President's September 2009 decision to impose prohibitive tariffs on Chinese tire imports under Section 421 of US trade law.  Back then, the only things that the President's decision had caused were skyrocketing domestic tire prices and Chinese retaliation against American chicken and automobile exports.  No new American jobs, no increased domestic production, nada.  (Yet the price pains continue to mount.)  We also had some preliminary import data showing pretty significant "trade diversion" - i.e., the shift in imports from the now-high-tariff China to other, still-low-tariff exporting countries like Brazil, Mexico and Korea.  And, of course, because other imports took up the Chinese slack, those static domestic jobs and production stats were pretty much expected.

Now from the US International Trade Commission comes a little more proof that Section 421 did almost nothing to change US import consumption habits and instead merely shifted Americans' purchases of Chinese tires to other foreign-made tires.  In a recent public report issued as part the ITC's current investigation of whether to expand Thailand's duty-free access to the US tire market under the Generalized System of Preferences (background here), the ITC found that imports accounted for almost the same share of total domestic tire consumption in 2008 (with no Section 421 tariffs) as it did in 2009 (with four months of Section 421 tariffs).  Here's the money-graphic: 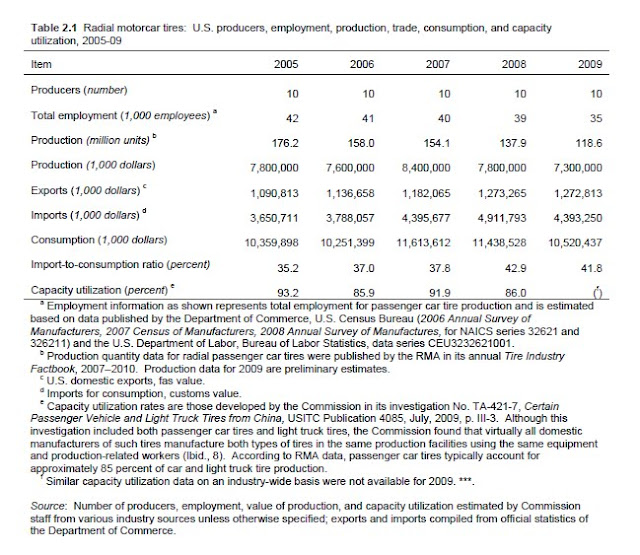 As you can see, there was only 1.1 percentage point change in the import-to-consumption ratio between 2008 and 2009, and 2009 was still 4 percentage points higher than 2007.  Maybe the Section 421 decision stopped the rapid acceleration in US import consumption; maybe it didn't.  It's difficult to really say.  But that's certainly not what the White House promised us because they weren't championing Section 421 as a mere band-aid.  It was supposed to "level the playing field for American workers in the tire market."

So much for that, huh?
Posted by Scott Lincicome at 7:27 PM

It's leading to consolidation of the industry, giving incentive to the large bulk buyer (1+million) of tires, but never a decrease in price. Due to the tariff imposed in 09, my customers are paying on average, about a $100-$150 more for a set. Not to mention the auto industry restructuring; they have increased SKU's by over 1000 new sizes. Now, the consumer is left with little to no options across the board. They are subject to what is available, and they are subject to the price. I'm not sure what the manufacturer is doing, but it seems, at least in my home state of South Carolina where there have been a few new tire manufacturing plants break ground within the past 3 or 4 yrs, that the manufacturers are coming out ok. It just doesn't make sense. If people can't afford the damn things, what good does it do to impose tariffs?