Cool/Scary Graphic: The Increasing Insanity of the "Smartphone Patent Wars"

I haven't reported much on the "Smartphone Patent Wars" over the last couple years, not because it isn't an important and newsworthy development in international trade but instead simply because patent/trade law is highly arcane (yes, even more arcane than trade remedies) and there are so many different disputes that it's really, really difficult to keep track of the issue.  The WSJ's Holman Jenkins has done some great reporting on the issue, so if you want a good place to start, look no further than his work.  However, a new infographic from Businessweek provides an great visual summary of just how insane the Patent Wars have become (click to enlarge): 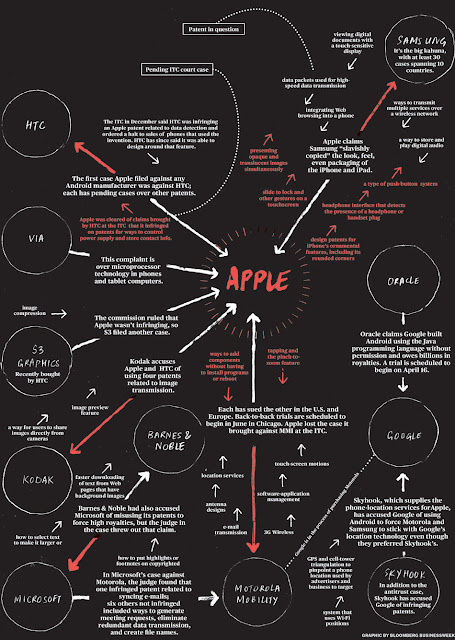 So, to recap, arcane law and enough disputes to make your head spin. (See?  This is why I haven't blogged on it!)

Of course, all of this craziness has serious implications for global trade in one of the most important and in-demand consumer product categories on the planet.  I don't know of a good study summarizing these implications, so feel free to point me to one in the comments.  If there aren't any such studies out there, hopefully some enterprising wonk will get with the program and publish one soon.

UPDATE: Right on cue, Businessweek published a lengthy new report on the Smartphone Patent Wars.  It has great background on the genesis of the legal fights (hint: Eden is somewhere in Cupertino, CA), but still has very little on the large and obvious trade implications.  Still worth a read, however.
Posted by Scott Lincicome at 6:46 PM