Recent, widespread reports that US inflation remains tame in the face of ever-loose monetary policy have been met with skepticism from certain folks because the most common metric - "core CPI" - omits rising food and fuel prices.  One such critique that recently caught my eye came from Ben Domenech in his must-read newsletter, The Transom, who noted among other things that "according to BLS figures, over the past five years, the average prices for all goods are 7.7% higher; the average price of bread is 10.4% higher; and the average price of meat/poultry/fish/eggs is 16.2% higher."

In a subsequent email, Domenech sent along the following chart, which really hits his point home: 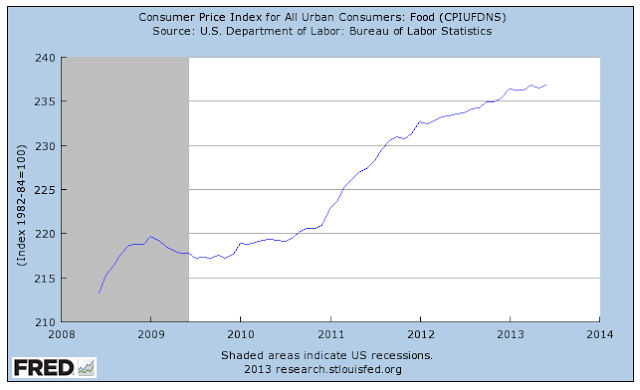 That's a pretty stark picture, and it got me thinking about what's causing the recent and alarming spike in US food prices - a problem that, of course, disproportionately hurts poor American families and stands in stark contrast to fantastic price declines for many US consumer goods (as documented repeatedly by AEI's Mark Perry).

As it turns out, there are several government policies that are conspiring to keep US food prices high and rising and thereby line the pockets of certain special interests at US consumers' expense.  I'd be remiss not to lead off with the fact that many archaic US trade barriers on certain foods thwart foreign competition and the lower prices that it facilitates. According to the US International Trade Commission's latest report on "The Economic Effects of Significant U.S. Import Restraints," these artificial barriers to free trade raise US prices of certain foods to levels that are well above global averages.  I railed against these barriers back in 2009 using the previous version of the ITC's report, and that critique unfortunately remains valid (although certain numbers obviously have changed):


The table below is from the 2009 ITC report (click to enlarge).  It shows the products that face the highest import and export tariffs in the United States, as well as the US-world price difference caused by those import barriers. 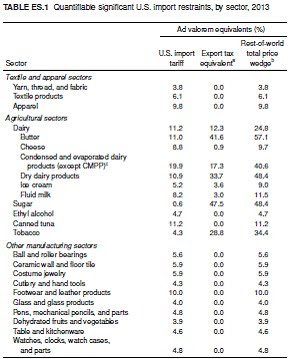 As you can see, some of the highest trade barriers in the United States are on things that American families use everyday - food (cheese, butter, milk, sugar, tuna, etc.), clothing (including thread, fabric and textiles) and shoes.  The taxes on these necessities range from a few percent to almost 48 percent, and these trade barriers result in US prices that are up to 57 percent higher than prices for the same goods in other markets.  So, for example, US trade policies force American families to pay $1.57 for a stick of butter, while Canadian families pay only a dollar for the exact same thing.  Nothing like a 57% butter tax to help the Joneses really tough-out the recession, huh?  Awful.

Thus, archaic US trade barriers designed to protect certain food producers - most notably sugar and dairy farmers - from international competition inflate food prices and force American consumers to pay through the nose.  Like I said back in 2009, awful.

As bad as this protectionism is, however, it only helps to explain why US food prices are artificially high versus world market prices; it doesn't explain the dramatic spike in domestic food prices over the last several years (the protectionism isn't new).  Some of this increase is most definitely due to market forces like increasing global demand for food and recent weather problems, but there are also several non-market (read: government) factors at work here.  Perhaps the biggest one is the United States' ridiculous support for ethanol in the form of direct subsidies and the Renewable Fuel Standard which requires refiners to add steadily increasing amounts of ethanol to gasoline.  Reporting on a new study by FarmEcon LLC, the Heartland Institute summarized how these policies affect food prices:


For more than half a century, from 1950 through 2005, U.S. consumers benefited from gradually declining food prices. Since 2006, however, prices have sharply risen, with a typical family of four now paying $2,055 more in food bills than would be the case if costs had kept to the 1950-2005 trend line.

Rapidly rising corn prices, caused primarily by ethanol subsidies and mandates, are the most important factor in rising food prices.

“Fuel ethanol production capacity, based almost entirely on corn as a feedstock, exploded from 2006 to 2009,” the study reported. “Demand for corn to supply the new plants also exploded. Corn production did not keep up with the higher demand, and corn prices have more than tripled since the mandates came into effect.”

“Corn is just one of many basic farm inputs used to produce the U.S. food supply. However, with increases in biofuel demand and declining corn production, corn prices have increased sharply. In turn prices of other major crops have also gone up significantly. This ranges from major field crops like soybeans and wheat, to horticultural crops such as potatoes, strawberries, and processing vegetable crops. Higher prices for other crops were necessary in order for those crops to compete with corn for land.… These higher commodity prices mean higher incomes for crop producing farmers, but also higher food production costs, higher consumer food prices, and increased food costs for family budgets,” the study explained....

Other studies - including one by the non-partisan Congressional Budget Office - come to similar, depressing conclusions: US ethanol policy forces food prices higher, benefiting a small cabal of farmers and domestic ethanol producers at the expense of American families and the economy more broadly.  Reason's Peter Suderman adds (in case you weren't offended enough already):


Last summer, three farm economists at Purdue University estimated that even if we just partially relaxed the renewables standard, corn prices could drop by as much as 20 percent. (That could also help ease the impact of rising gas prices, another factor that Karlgaard names as hurting Walmart in his oped, by increasing fuel economy.)

It’s not just American consumers who would benefit. It would also help stop the rise of food prices worldwide, which harms poor and developing nations. The global impact is big enough that last summer, the World Bank suggested that an immediate easing of the renewables mandate could prevent a world food crisis.

But if you think that all these reports on ethanol's serious problems would somehow lead to reforms, Tim Carney helpfully instructs us today to think again:

Ethanol's best asset may not be on K Street, but in the EPA: new administrator Gina McCarthy. McCarthy, confirmed by the Senate last week, is a consistent ethanol-industry defender.

McCarthy, then assistant administrator for EPA's Office of Air and Radiation, denied the request.

Unfortunately, US ethanol policy isn't the only thing causing the recent run-up in food prices.  It turns out that a combination of easy money and federal subsidies (particularly crop insurance) has facilitated intense speculation by both farmers and investment firms in the US farmland market, with quite predictable results:


Because higher prices for crops means farmers could make more on their land, many are using their growing profits to buy more land. Investment firms have caught on -- they're buying too.

The Kansas City Federal Reserve said irrigated cropland in its district rose 30% in 2012, while the Chicago Fed reported a 16% increase. And despite the drought in Iowa last year, farmland prices have nearly doubled since 2009 to an average of $8,296 an acre. Prices in Nebraska have also doubled during the same period.

Analysts and economists have quietly warned of a bubble in farmland since 2011. The latest comes this week -- a group of bankers advising the Federal Reserve warned prices aren't justified and have entered bubble territory, according to records obtained by Bloomberg of meetings of the Federal Advisory Council. As investors shy away from bond markets and search for bigger returns, members say they've opted for farmland. They blame the central bank's super-low interest rate policies.

"Agricultural land prices are veering further from what makes sense," according to minutes of the Feb. 8 gathering of the Federal Advisory Council. "Members believe the run-up in agriculture land prices is a bubble resulting from persistently low interest rates."

More on the farmland bubble and its causes is here and here.  Further encouraging these investments is the fact that they receive artificial support from federal subsidies, especially the types of crop insurance that both the House and Senate just doubled-down on in the latest Farm Bill.  So investors use dirt-cheap credit to buy land whose ever-increasing value is protected by taxpayer-subsidized insurance.  Perfect.

Also, as we've already discussed, pushing up crop prices and encouraging more farmland speculation is US ethanol policy, creating a rather vicious government-driven cycle: ethanol subsidies and mandates lead to higher crop prices, which combine with super-low interest rates and federal subsidies to encourage farmland speculation by both farmers and Wall Street investment firms, which leads to even higher food prices, thereby encouraging even more speculation.

Caught in the crossfire, of course, are struggling American families who don't have the luxury of being part of the ethanol con or having the spare (low-interest) cash and connections needed to invest in taxpayer-subsidized farmland.  For them, it's all downside, driven (in part) by really bad government policies.

So maybe overall inflation is in check, but that doesn't mean that federal monetary and other policies aren't causing pretty serious problems for a large portion of the citizenry, particularly those on the lower-end of the economic spectrum.  Such problems are definitely out there; you just have to look beyond the headlines.
Posted by Scott Lincicome at 2:45 PM